Bycroft Butchers was first established at 37 Wormgate, Boston by the late Mr Tom Bycroft, who, coming from a generation of butchers dedicated his life to the trade.

The current owners of Bycrofts, Mr Jeff Greenfield and Mr Nigel Lote were 2 of Tom’s loyal and skilled butchers and worked for Tom Bycroft for a combined total of 50 years!

85 YEARS IN THE MAKING

Now over 85 years on from when the business was set up, Bycrofts is now situated in new premises down Dolphin Lane, Boston. It continues to grow from strength to strength and Jeff & Nigel are proud to be continuing the name of Bycrofts.

2015 Butcher Pride competition – Top prize – Pat on the back!!!
We have immense pleasure in announcing that not only did our Lincolnshire Pork Sausages win yet another Gold award at the 2015 Butchers Pride Competition but we were awarded Top Prize of Overall Best Sausage!! We are delighted with this award as it confirms what all or our loyal customers have been saying for years – that out traditional sausages are the best in town!!

This year there was a record entry of 30 different sausages entered into the competition which covered butchers from Boston, South Holland and the Deepings.
The excerpt below is from the Spalding Guardian Newspaper.

‘’MP… John Hayes said: ‘’I designed this competition to boost local businesses ans back Lincolnshire sausage makers…Sausages are a source of immense pride to those who make them and enjoy them…I’m certainly among those who enjoy eating them!”

The coveted gold awards went to Trevor Sharpe for his black pepper speciality sausage and to Bycroft’s of Boston for their Lincolnshire sausage.

However, it was Bycroft’s with the highest overall points score who won the cut glass trophy donated by Mr Hayes, taking it to Boston for the first time in the competition’s four years.”
In 2018 the Eighth Butcher’s pride sausage competition, organised by Boston College: sausages are ‘blind tested’ by a group of six judges and marked for appearance and smell, texture, taste, and seasoning and flavour.
Although a Spalding butcher scooped the overall prize by just one point on Friday for their pork and stiton sausage. They had won the specialist sausage category, with Bycrofts of Boston and Trevor Sharpe of Gosberton tying for the Lincolnshire sausage award. The highest overall score from both categories wins the coveted Butcher’s Pride trophy. 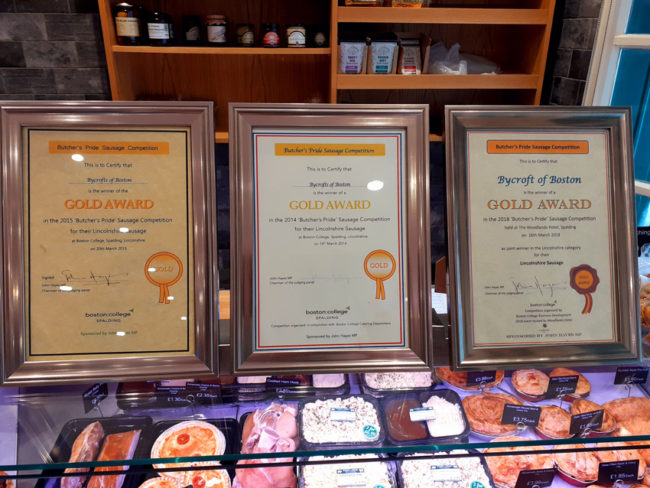 Now you can even order online with us, safely and securely.
Shop our various products, order bulk items, or just give us a call and place an order by phone.

This website uses cookies to improve your experience while you navigate through the website. Out of these cookies, the cookies that are categorized as necessary are stored on your browser as they are essential for the working of basic functionalities of the website. We also use third-party cookies that help us analyze and understand how you use this website. These cookies will be stored in your browser only with your consent. You also have the option to opt-out of these cookies. But opting out of some of these cookies may have an effect on your browsing experience.
Necessary Always Enabled
Necessary cookies are absolutely essential for the website to function properly. This category only includes cookies that ensures basic functionalities and security features of the website. These cookies do not store any personal information.
Non-necessary
Any cookies that may not be particularly necessary for the website to function and is used specifically to collect user personal data via analytics, ads, other embedded contents are termed as non-necessary cookies. It is mandatory to procure user consent prior to running these cookies on your website.
SAVE & ACCEPT